Heli Info
There are lots of great sites out there with loads of information about radio controlled model helicopters, with all levels are covered from beginner to experienced 3D pilot.

Anyone new to the hobby should seriously consider purchasing a software simulator for their computer as crashing on the simulator will not cost you anything (well only your pride)!

Starting with an indoor model is also a good idea and a contra-rotating model is the ideal choice, such as the e-Flite mCX. See the Beginner page for more information.

Drones
There is a lot of bad press about drones so before you consider buying a quadcopter take a look at the information the BMFA has put together in association with the CAA on the subject and stay legal! Any drone over 250 grams weight will require an operators licence! Visit the drone aware site.
This site is dedicated to my many hobbies, which include all sorts of technology items, including digital cameras, audio and video equipment and of course radio controlled model helicopters!

Remember: Be safe when flying any model aircraft. In the UK any drone or RC aircraft over 250 grams in weight requires an operators licence and flyer ID (pass a simple online test), obtained via the CAA registration website here. Also, take a look at the Drone Code on the website. Insurance is also a good idea and cover is included in BMFA membership.
Radio controlled model helicopters, along with their associated quad copters and drones, have become very popular, as their price has fallen and they have become more affordable, and in many cases easier to fly! Quadcopters are often referred to as drones or UAV (Unmanned Aerial Vehicle), have risen quickly in popularity due to their use as camera platforms and have received a lot of media attention! Why not make this the time to start a new hobby and join the growing band of model helicopter and quad-copter flying enthusiasts!

If you fancy the idea of flying a model from the perspective of being in the cockpit then consider models that offer FPV (First Person View). Here the model has a camera that transmits its view back to a set of goggles so the pilot can see the view as if in the model. You can start off with a small indoor quadcopter (drone) to test your skills out before moving on to bigger models.

A larger and simpler FPV solution is the Parrot Mambo FPV set as shown below. 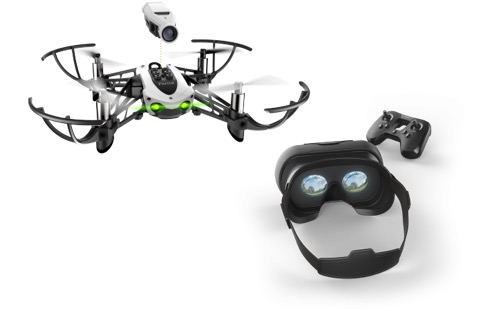 The Parrot Mambo uses a camera attached as an accessory to the top of the drone and then you place your smart phone into the supplied goggles. The controller is then used to steal the drone while you vie the camera images through the goggles on the mobile phone screen. This option can be obtained as low as £89 so makes a cheap introduction to both drone flying and FPV.

If there is something more you would like to see on this site then let me know and I will try to oblige!

There are lots of small indoor designs to choose from, but I would always spend a little more for one sold in a reputable model shop to ensure spare parts are available. I would also suggest when you are starting out it is best to try an indoor contra-rotating model like the e-Flite mCX or a quad copter, such as the Blade mQX. When moving to an outdoor model practice on a flight simulator and get the largest rotor diameter model you can afford! Also available are four bladed models known as Quadcopter (also called quads or quad-copters), which rely on sophisticated 3 axis stabilisation to provide a stable model. Quad Copters are now growing in number, spurred on by the fact they are the best platform for aerial photography. Their falling price and increased stability over conventional model helicopters, coupled with the fact they can be small enough to fit in your pocket, are increasing adoption.

My own fleet started back in 2000 with a JR Ergo 30 nitro powered model and then in 2001 also obtained a Ikarus Eco 8 electric helicopter. In 2003 I replaced the JR with a Thunder Tiger Raptor 30 (V1) as parts were cheaper. When time allows I intend to build and fly a scale helicopter, and settled on the Align AH-1 scale fuselage which uses a T-rex 500 for the mechanics. I also have a DJI F450 quadcopter to add to my growing fleet.

Electric helicopters have now become very popular but are not always ideal for learning to fly, as most are small they are not as stable and will not perform well in windy conditions experienced outdoors. Although nitro powered models may seem messy they can be landed and refuelled quickly and for less initial outlay than an equivalent electric model. But soon the cost of fuel over time outweighs the cost of batteries so it is a case of swings and roundabouts!

Those new to radio controlled model helicopters should look at the beginners section for advice and help and advice on selecting a model.

I have added some new sections on Cameras, Audio and Video, where I will give advice and recommendations on my favourite audio visual, photographic and other gadgets! 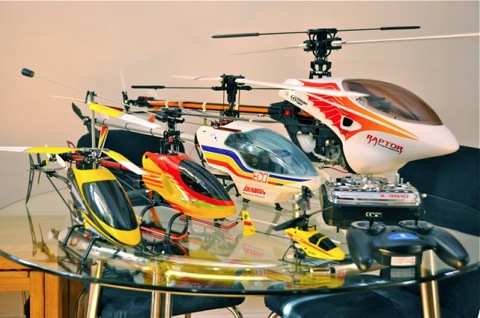 Cookies are only used for Google analytics on this site, so does not collect any identifying information. If you use the contact form or email me I will respect your privacy in line with GDPR.